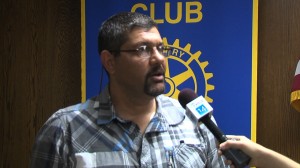 After serving 27 years in the military, Manhattan resident Tom Tavitigian medically retired last year.  He was  injured in an I-E-D explosion in 2008.  Tavitigian has had 17 surgeries since then.

“I’ve met many vets who have many issues,” Tavitigian says.

Two years ago he founded Wounded Warriors United to give back to those who’ve given so much.  Monday he was the guest speaker at the Hays Rotary Club.

“Wounded Warriors United is a non-profit organization exclusively founded for our Combat Wounded and Combat Veterans, ” says Tavitigian.  “What we do is provide free events to our heroes,  including hunting, fishing, camping, hiking and social events. These activities are therapeutic and help in healing their hearts and minds.”

Wounded Warriors United was formally incorporated in Kansas in 2011, although Tavitigian was organizing the events for nine years before that.  WWU has a number of corporate sponsors of the outdoor sporting events, but depends heavily on private financial donations.

“My goal is to reach out to as many veterans as possible, giving them three days of peace, or meeting someone they can pick up the phone and talk to, someone who’s been through what they’ve been through.”

Leave a reply Click here to cancel the reply